Ayeza khan Queen of Lollywood Showbiz Industry She is at 29 and Now she is on the stage of Maturity of her carrier and the peak of her life. She is a very hardworking woman as an actress and as well as a mother. Ayeza has 4 sisters.

Ayeza Khan and her Husband Continuously working in Showbiz industry without any break. Danish Taimoor also host a Game Show on Bol Entertainment. Danish Taimoor was done the most hit drama Mera Rab Waris working with Madiha Imam. This is the story based on a religious point of view.

The momo of Ayeza also likes a young woman, Ayeza mostly not attend any function or party the main focus and Passion to increase the efficiency and Productivity in her carrier. She also spent valuable time with Family and Friends. She is the most active social media celebrity.

Ayeza have 7.2 Million followers on Instagram and there is an uncounted fan page of Ayeza Khan. Danish also mostly focuses on his carrier.  Danish and Ayeza marriage had completed 6 years and they still have carrier-oriented thoughts. Recently Danish and Ayeza were outgoing with Ayeza Family her mother, father, and many others. 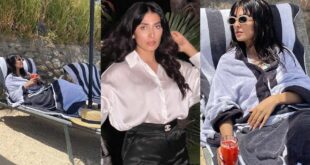 From Last two Months, Ayeza Khan is on Vacation in Different Countries and her Most …