Fahad Mustafa is not only a Professional person but also proved himself a family, oriented person. He married with Sana Fahad and have two cute and charming kinds. often his visit with family to abroad can be seen on social media. Fahad is an unmistakable person and have special place in the heart of Pakistani people.

The fabulous actor of, Jawani Phir Nahi Ani, speaks in his recent interview on public criticism on Jalan and Nand drama serial that are produced by him.  In the end of interview, he said that we are not Turkish not Indians, we are Pakistani. Ertugrul came, took the money and left. didn’t?

He also adds that I am here Humayun Saeed is here for u people. but, the Actor in law, comment’s did not sit well with PTI senator Faisal Javed Khan he replied on his interview that doesn’t take Turkish actor fame as a threat instead takes it as an opportunity.

Sana Fahad writing interesting content for her husband’s dramas. This admirable producer of Pakistan showbiz has strong bonding with his family and never hesitate to confess his life for his wife on his famous show, Jeeto Pakistan. Currently, his project includes Dunk and blockbuster movie Quaid -e Azam Zindabad. And won many awards for his outstanding performance. 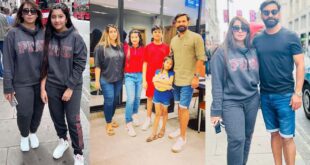