Ghana Ali celebrating their Birthday With her daughter and Husband

Ghana Ali is a Pakistani model and actress with incredible talent who has been working in the industry since 2015. In the movie “Rangreza,” which also starred Urwa Hocane, Gohar Rasheed, and Bilal Ashraf, Ghana made her big-screen debut.

She prefers to model or work on photo shoots, so she rarely appears in Pakistani dramas as an actor. Because of this, she is frequently involved in photo shoots for various clothing brands’ upcoming collections.

Ali became successful in business by playing the lead role in the Geo television series Sangdil.In 2017, she made her feature film debut in the musical show Rangreza.

Recently, Ghana celebrated her adorable husband’s birthday, Umair, and the two are depicted in recent photographs as a blessing couple. Umair’s husband, a businessman with and humble personality, always wears simple attire.

Previous Sadia Imam and Hiba Bukhari Together Pictures in Public 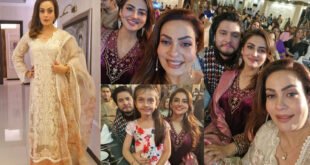 Sadia Imam and Hiba Bukhari Together Pictures in Public