Zainab Shabbir is the rising star actress and Model of the Industry She is one of the youngest actress in Pakistani Fashion Industry Zainab joined the showbiz industry at the age of 16 and now she is at 22. She did Bcom in Karachi and also the focus of her carrier. People like her acting and way to perform the role.

Usama Khan also a growing actor and Model In the Pakistani Dramas Industry. He is only 29 years old the belongs from Gujranwala. The interesting thing is that Usama also belongs from a Commerce Education background same as Zainab Shabbir. They both are best on-screen couple and mostly shares pictures together.

Zainab working in many hit dramas of Showbiz Industry and the famous drama Meharposh She was worked with the most legend actor of the Industry Ayeza Khan and Danish Taimoor. Haqeeqat, Malaal e Yaar these the famous hit serial of Zainab. She also the social media Fan Following this is the growing stage of Zainab and She has almost 500k followers on Instagram.

Usama and Zainab mostly recognized as on screen couples yesterday the Famous Host Nida Yasir invited to Usama and Zainab in her morning show and Ask some lovely and naughty questions and also shares some adorable lovely clicks.

Usama also worked in the most loving hit projects The drama Sanwari in which Zainab and Usama play the leading role and Uraan is another hit Serial, He also has a fan following on social media with 110k followers on Instagram. 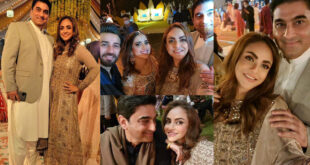